It seemed as though parents were trying to "out spend" each other when putting together their children's parties; but when the economy hit the skids some parents became pretty creative.

Two years ago our daughter-in-law asked our granddaughter who was about to turn six years old what kind of a party she wanted for her birthday. Since pizza is her favorite, our little darling said she wanted a pizza party.

Our daughter-in-law thought about that and wondered how she could keep 10 six-year-olds (and one 4 yr. old little brother) involved and having fun for a couple of hours at a pizza party. It didn't take long before she put together one of the best parties these kids said they had gone to all year.

Our granddaughter likes to cook and bake and loves helping in the kitchen so our daughter-in-law suggested that the young girls (and little brother) make their own pizzas.

If anything Sue is a planner, so she laid out the plan for the party. First things first – how to keep these energetic little girls engaged for 2-3 hours.

1. She purchased child sized white aprons for each of the guests and markers to decorate them, as she wanted this celebration to be creative and lasting.
2. She purchased individual sized pizza shells, pizza sauce, fresh mozzarella, grated parmesan cheese, and sliced lots of pepperoni, mushrooms, olives and peppers.
3. Purchased goodie bag favors.
4. Enlisted both grandmas and her husband to help out on the party day.

Each child received an apron when she arrived and was ushered into the kitchen where the table had a plastic tablecloth, and was instructed to put her names on her apron and decorate them as she saw fit.

The decorating took 35 – 55 minutes – upon completing their decorating they were ushered into the family room where they put their apron on and their picture was taken next to the big Happy Birthday sign by this grandma. (Each child's picture was emailed to their parents the next day.)

They then got to work "making" their pizza. Each girl got a pizza shell and was instructed on how to build their pizza. They loved being able to put their favorite toppings on their individual pies. This took about another 20-30 minutes.

While the pizzas were in the oven, it was dad's turn to take the girls outside and oversee games and contests. (15-20 minutes)

The picnic table was set to eat their pizzas, birthday cake, ice cream and juice in the backyard.

So the issue this year was how to top that party without blowing the budget? 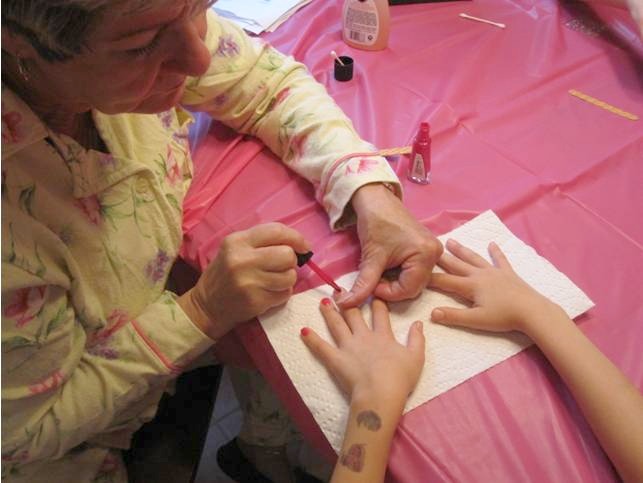 Our little angel told her mom she wanted a sleep-over party and wanted to invite all her friends from her Daisy Troop (Jr. Brownies.) That meant 15 girls – Sue explained that they were a bit too young for a sleep-over but suggested that they could have a pajama party!

Again, the grandmas and husband, along with the addition of Aunt Diane, were invited as the work crew and were asked to come in their PJs and fuzziest slippers too! This time the girls arrived in their pajamas and brought their own pillows.

Dad and this grandma made pancakes, sausage and a wonderful serving of mixed berries for each of the guests as their "breakfast" in keeping with the party theme.

Sue had purchased plain white pillowcases for each party guest, and got out those markers again.

This time they were ushered into the dining room where the table was covered with a plastic table cloth and the adjacent living room floor covered with a drop cloth. The kids were instructed to put their name on their pillow case and decorate it as they wished. They spread out in all directions and the creative juices started to flow – the adults were very impressed.

Upon completion of their pillowcases, they were brought into the kitchen where three "manicurists" were ready to give them each a manicure. One of the other mothers had recommended a new, safe Sally Hansen nail polish that literally dried in one-minute. Each girl had her choice of three different colors and little stickers.

From there each youngster went into the family room with her pillow to watch one of our darling's favorite movies – along with their popcorn, Twizzlers and juice.

Total party cost: (just under) $100 and the payback was several "Wow, this was the best party ever!"