Aileen Crowley, A :          Could you deal with adversity like this? When Megan Crowley was 9 months old, Aileen Crowley and her husband John noticed their daughter didn’t seem to be developing as quickly as had their oldest son. Her muscles did not seem to be working correctly.

The Crowleys were told the disease would kill their daughter before she turned 2. The same day, they learned that their then 7-day-old son, Patrick, had a 25 percent chance of also having it. Turns out he did. The couple’s oldest son, John Jr., nearly two years older than Megan and now in 8th grade, is fine.

Pompe is a genetic disease. Both Aileen and John carry it, but neither had a family history of the disease. At the time the Crowley children were diagnosed, there was no treatment, either to lessen the impact of the disease or extend a patient’s life.

Reacting like any parents would, John and Aileen used every resource and every waking minute to battle the disease.

Now, because of their efforts to push science to save their kids, there is a life-saving treatment for Pompe disease. And their journey has inspired a movie — “Extraordinary Measures,” starring Harrison Ford, Brendan Fraser and Keri Russell — which opened Jan. 22.

The movie was inspired by John’s decision to walk away from a secure job to found a biotechnology company dedicated to developing a treatment for Pompe disease. Later, he sold the company to a larger one that brought a treatment to patients — including Megan and Patrick.

Aileen’s job, meanwhile, was to focus on the kids — taking caring of them while, at the same time, keeping their lives as normal and upbeat as possible.

Along the way, Aileen had to deal with the loss of privacy that resulted from a houseful of nurses, health insurance issues and the stress that came with knowing her children had a fatal illness. She seldom reached out to other parents whose children had Pompe disease because she “just didn’t want to know what to expect in the future.”

Today, that future is here, and it looks bright.

Megan is in 7th grade and Patrick is in 6th. Physically, they still have very special needs, but they go to public middle school in with their brother, and will go to . Megan is a star student, getting all A’s this past semester. Her plan is to go to Stanford because of that university’s great education and California weather. Patrick also is a solid student but doesn’t like school, so his future plans are still up in the air. He may want to be a policeman like his grandfather. Both have been going to regular schools since kindergarten.

Aileen describes the family dynamics among the children as being pretty much what they would be in any family. Megan and Patrick argue like most brothers and sisters. John Jr. and Megan, though, are always protective of their younger brother, Patrick.

But that’s not to say that the kids don’t have challenges.

Both Megan and Patrick are wheelchair-bound and continue to rely upon ventilators to breathe. Both require separate nursing attention 24/7 everywhere they are, including in school.

Megan cannot move either leg and moves only one arm. And since being diagnosed, neither Megan nor Patrick has been able to chew or swallow food. They are fed by tube and have no appreciation for food. They can’t understand why Aileen and John occasionally enjoy eating out!

Pompe disease — which can begin in infancy, childhood or adulthood — is caused by a defective or missing enzyme. Without it, a patient’s body can’t break down glycogen, a sugar meant to be turned into energy. In Pompe patients, sticky glycogen instead accumulates in muscles, causing severe weakness.

The most life-threatening consequence of Pompe disease is enlargement of the heart — a symptom that disappeared for Megan and Patrick when they began taking the medication their father helped develop.

Despite their limitations, Aileen and John have taught their two youngest children to fight the good fight and to realize they can be all they want to be.

Aileen describes Megan as “feisty” and says that is a great attitude for her to have. When describing her condition to others, Megan simply jokes that she has a “minor breathing problem.” Patrick’s life is a bit more complicated because speech is difficult for him and he has to communicate by typing things out on his computer. Aileen and John have worked hard to teach the children that, in their own way, they are just as normal as all kids and can achieve whatever they set out to do. Both kids have their own circles of friends.

Aileen and John, both now in their early 40s, made a pact between themselves when all this began that they could never have a bad day at the same time. One of them would always have to be “up” if they were going to get through this as a family.

They’ve succeeded in that, but they haven’t done it alone. When we spoke with her for this piece, Aileen mentioned how thankful she is for the great team of nurses that the family has assembled over the years. One has been helping the family for 10 years.

Nevertheless, things happen, and when they do, Aileen has to play the role of a nurse in school, on vacation, at home and everywhere else. Aileen is the primary care-giver in the family and is never “off-duty.” 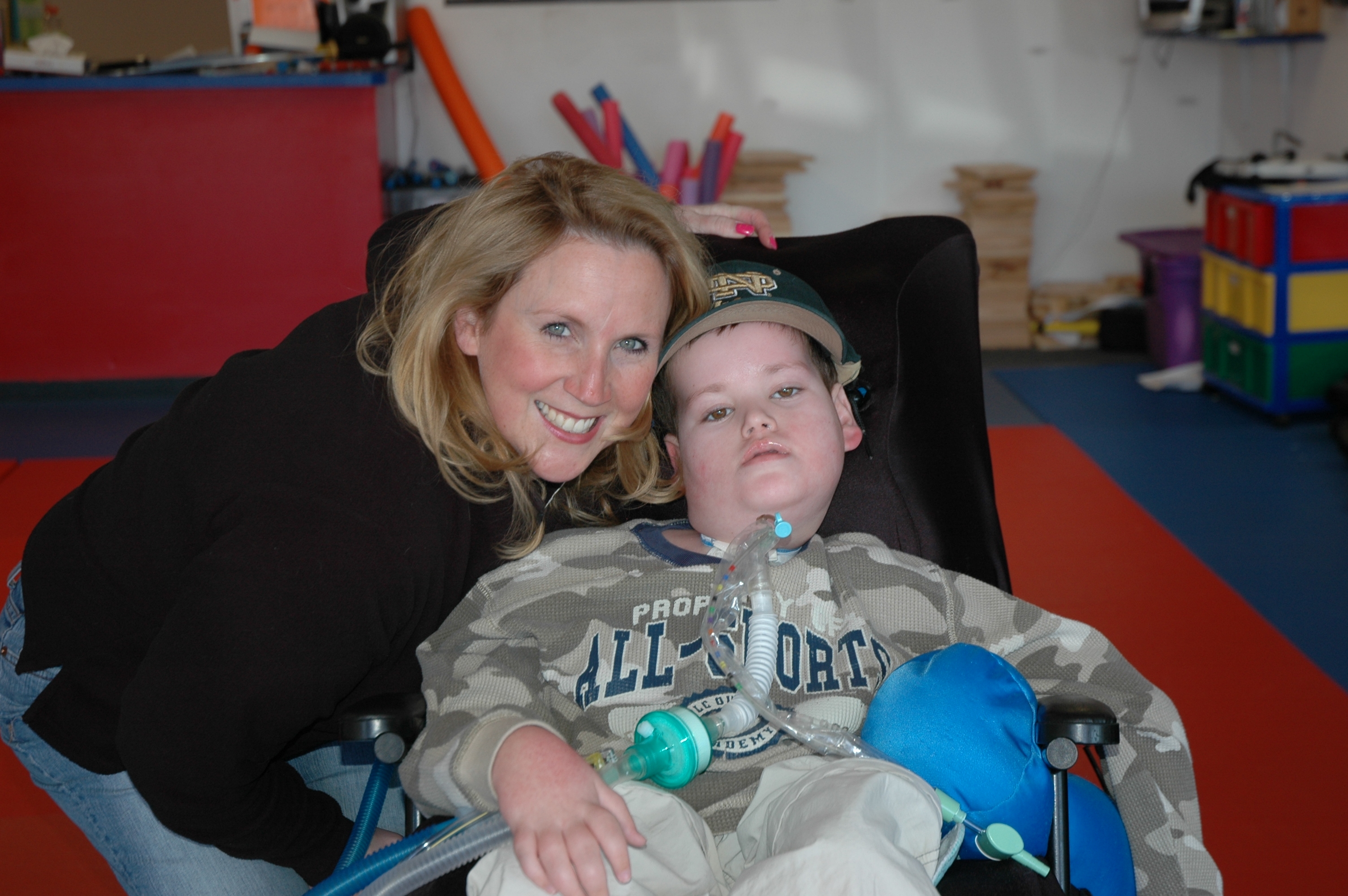 At the time of the Pompe disease diagnosis, John was working in the pharma industry with Bristol-Myers Squibb, using his great educational background. He has an undergraduate degree from Georgetown, a law degree from Notre Dame and an MBA from Harvard.

Getting on the computer on day one following the Pompe disease diagnosis and using every spare moment, John and Aileen researched the disease, including reaching out to experts on rare diseases worldwide. In 2000, within two years of the diagnosis, John quit his job, raised venture funding and started a biotech company (Novazyme) to find a treatment for Pompe disease. Progress was made.

To speed the work, the company was eventually sold to Genzyme, another biotechnology company that, with John’s help as a senior vice president, developed an enzyme-replacement therapy. To allow the children to receive the drug in clinical trials without creating a conflict of interest, John left Genzyme.

In January 2003, Megan and Patrick started receiving Genzyme’s therapy. Two years later, John joined another small biopharmaceutical company, Amicus Therapeutics in Cranbury, and remains there as president and CEO. Much larger now, Amicus is focused on finding treatments for a range of genetic diseases, including Pompe disease.

Six years ago, the Wall Street Journal ran an article about the family’s amazing journey. Harrison Ford happened to read the article and decided he wanted to make a movie about the family’s battle with Pompe disease. He found a producer and started working on the project. His first step was to pick up the phone and call the Crowleys. Aileen certainly was not expecting a call from Harrison Ford! Filming of the movie “Extraordinary Measures” started in March 2009. Most of it was shot in , where lots of movies are produced.

John Crowley has a cameo role in the movie. He plays a venture capitalist from whom John, in real life, raised the money to start his first biotechnology company. Aileen and the children were included in the movie, but during final editing, their piece, Aileen said, “wound up on the cutting-room floor.”

The movie’s premiere was held Jan. 19 in , and a special screening, also featuring the movie’s stars, took place on Jan. 21 in . The trip to the opening was too much for the kids, but they were excited to get the red-carpet treatment at the preview. Megan selected a polka-dot dress and traveled the red carpet in style with the rest of the family.

To this point, John has been in the spotlight because of his amazing work developing a treatment for Pompe disease.

First, there were the newspaper articles, then a book about the Crowleys’ journey, “The Cure,” by Journal reporter Geeta Anand — part of the inspiration for the movie. Now, John has written a memoir, just released by Newmarket Press, titled “Chasing Miracles: The Crowley Family Journey of Strength, Hope and Joy.”

Aileen wrote the introduction to the book, saying it shares some of the lessons the couple has learned about how to persevere in the most trying of times.

“It is from our three children that we have learned the most,” she writes, “without their ever knowing that they have been teaching us along the way. John, Jr., Megan, and Patrick have taught us more about life and love than we have ever taught them.”

Now that the movie and book have been released, Aileen is expecting more people, particularly women, to be reaching out to her for wisdom and guidance.

Her advice to other women going through tough circumstances is to “really bond with your partner. Nobody can go through these experiences alone. You have to have someone to lean on.”

For Aileen and John, it also helps that their families are in the area to create a support network along with the team of doctors and nurses that have become an integral part of their lives. “The children get to play with their cousins,” added Aileen.

It is clear that Aileen is a tower of strength who will continue to help all three of her children thrive.

More in this category: « Let's Hear Your Story A Venture to Support Health Clinics in Kenya »