Suzie Guillette transitioned from working as an employee in development in the stable environment of the American Heart Association to becoming a no-stepping- back entrepreneur writing and teaching writing. Here’s how she made the decision to change her life.

Garden State Woman: Suzanne, tell us what you are currently doing career wise?

Suzanne: I’m a freelance writer, and I also teach writing.

Garden State Woman: How long have you been pursuing this as a career and how is it going so far?

Suzanne: I’ve been writing all of my adult life, although I became more serious about it as a career in 2003, when I entered graduate school to study creative non-fiction. I published my first book, Much to Your Chagrin, this past March. Publishing a book has long-been an ambition of mine, so it’s been a very exciting year.

Garden State Woman: What are some of the biggest challenges and hurdles you face in this career path?

Suzanne: One of my biggest challenges, personally-speaking, is having patience. I have far more ideas than I have time to execute them, so sometimes it feels overwhelming; I often have to remind myself to be patient with the general process of things. Also, I sometimes struggle with keeping a regular writing routine (which is especially key, since I’m self-employed). The release of my book dramatically altered my writing schedule, and it’s taken me quite some time to get focused again, which isn’t ideal. The in-between periods—when I’m not in a project and not regularly writing—can drive me crazy. Also, it’s been a huge adjustment, going from a salary to income that is more sporadic in nature—that has taken some getting used to.

Suzanne: Great questions. Well, above all, I plan on continuing down the writing path. On my current “to-do” list, I have approximately three book ideas; two screenplays, and at least ten essays. Right now, I’m focusing on a longer project, which I hope will turn out to be my next book, although it’s a bit premature to say for sure. In five years, I’d love to have at least one more book out. I’m a bit slow, when it comes to my writing process, but regardless of the timeline, I hope to continue pursuing my curiosities about the world, in both fiction and non-fiction forms. It feels like a real privilege to be able to share these meanderings with a larger audience. Also, I really love public speaking. I’m currently working on an interactive presentation on the nature of choice and personal responsibility, which is based, in part, on my book and geared toward an undergraduate audience.

Garden State Woman: What were you doing before shifting to your current career?

Suzanne: I was working at the American Heart Association, which started out as a way to pay my bills, while I got my writing life in order. I ended up staying there for a couple years, working in the major gift and planned giving departments. I loved the social aspect of my work, especially working with volunteers. (Like you!)

Garden State Woman: What triggered the change from that successful work to your current career? What were the pros and cons of your previous career?

Suzanne: The AHA was great on so many levels—not the least of which is that it gave me a certain amount of stability, so that I could focus on writing my book. Eventually, I realized that I wanted to embrace my creative side more fully and that if I were going to do that, I should take the leap and leave my full time job, which I did. Two months later, I sold my book. The pros of that job were getting to work with some really wonderful people, being challenged in new ways, and having the freedom to be creative within the parameters of my fundraising duties. The major con was that it ultimately was not what I wanted to be doing with my life, and at a certain point, I began to worry that I was wasting my time. Of course, by that point, I was working in the planned giving department and meeting with donors, many of whom were preparing for the end of their lives. I’m sure that this kind of work helped me come to that realization more quickly.

"...if someone feels that there’s something else

she’d rather be doing with her precious time,

she should take these feelings seriously..."

Garden State Woman: What did you do prior to working with the American Heart Association?

Suzanne: Before the AHA, I was in graduate school, for writing. Prior to that, I had been living in Boston and working in fundraising, at various non-profits, while writing on the side.

Garden State Woman: What is your educational and family background?

Suzanne: I have a Bachelor’s degree in Philosophy, from George Washington University. I also have a Master’s of Fine Arts in Creative Non-Fiction, from Sarah Lawrence College. As far as family background, I’m the youngest of four children. My parents are from larger Catholic families, and so I’m blessed with lots of relatives, many of whom are involved in the arts in one way or another.

Garden State Woman: What advice can you share with other women looking to make a career shift?

Suzanne: I’d say: go for it! I think that if someone has an idea that there’s something else that she’d rather be doing with her precious time, then it’s important to take these feelings seriously—it’s absolutely worth risking the uncertainty that comes with choosing a different path. I’d also say, start brainstorming ways that your interests could turn into a new career path. Do your best to be open the possibilities that are already at your disposal—chances are, you’re not as far from your goals as you might think. Sometimes it’s just a matter of putting your experiences and ideas into a new perspective. I’m also a huge fan of making lists. Last summer, I went to Southeast Asia for two month. Part of my daily routine was writing lists about what I wanted, from experiences in work, life, and love. It really helped me to clarify my own intentions. Also, it’s important to surround yourself with people who are making or have made similar shifts, so that you can share ideas and be supportive of and inspired by one another. Oh, and forgive me is this is terribly obvious, but cultivating a deep trust in your own instincts will help you maintain your own sense of personal integrity.

Garden State Woman: Similarly, what advice can you share about being successful within an organization like you were with the Heart Association and then being successful as an entrepreneur in the writing industry?

Suzanne: At the AHA, one thing that really helped me was being creative in thinking about the challenges of my work—I had enough autonomy that if I had an idea for, say, an event, it was possible to make that idea a reality. I wasn’t by any means a trailblazer there (!), but I did take a certain amount of initiative, and this certainly helped strengthen my confidence and my sense of authority. As far as being an entrepreneur, I still feel a little green, even though I’ve been working as a writer for almost two years. In my current job, I borrow a bit from an old fundraising tip, which is to make the first order of the day a task that has the greatest likelihood of yielding income. In my case, I’m a morning writer, so ideally, I use that time to mine my own creativity. Then, I move on to the business side of things—pitching pieces, finishing assignments, and continuing to promote my book.

Garden State Woman: We heard that you have boxed as a form of staying in shape. Is that true? How did that happen? Do you still do it? Do you recommend it for other women?

Suzanne: Yes, I stumbled upon boxing in an all-women’s gym in Cambridge. I fell in love with the all-out physical exertion that the sport requires. From there, I boxed while abroad, in Prague, and then in the Bronx, at a small mom-and-pop gym in the Morris Park neighborhood. I do recommend it to other women. It’s an amazing way to access your own sense of power. I stopped boxing almost four years ago, when I moved to Brooklyn from the Bronx. For the last few years, I’ve been into bikram yoga, as well as dance, a lifelong love. 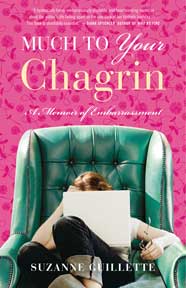 Garden State Woman: How is your first book doing? What will your next book be about?

Suzanne: Given the current economy, I’d say it’s doing OK. It’s been out for four months at this point; I don’t have official sales figures yet. I’m very proud of the book and would love for it to reach as wide an audience as possible, so I’m continuing to promote it actively. I’ve really enjoyed getting emails from readers who have been moved by the story and/or who can relate to the struggles that I’d dealt with that year. A number of women have written to say, “I thought I was the only one who thought like that…” Hearing those kinds of responses really means a lot to me. As far as my next project, well, I’ll just say that it’s a work of fiction—and that it’s still finding its shape.

Garden State Woman: This has been really nice. Thanks so much!

Last modified onTuesday, 19 March 2013 15:52
Rate this item
(0 votes)
Tweet
More in this category: « Getting Back on Track Rebecca Freed Interview »

Now is the time to reflect on what needs to change as you map out your 2021 journey.  One of the key components of your strategic plan will be generating income.  If your plan includes creating a business or growing your business, there is a resource that can offer guidance. The Small Business Development Center (SBDC) at Ramapo College is a federal-state education partnership, primaril...

“Please take my son and give him an education”.  This desperate plea by a widowed young mother from Tibet who had fled from her village  to Beijing, China in an effort to make enough money as a street peddler of Tibetan jewelry to educate her son was a real life experience of journalist and filmmaker, Jocelyn Ford. It became the motivation for her powerful documentary, Nowhere To Call ...

(Eastern Bergen County, New Jersey; September 24, 2020) -- As the COVID-19 pandemic continues to impact and affect peoples' lives and our elections, the League of Women Voters of Northern Valley (LWVNV) wants citizens to know how to participate in the upcoming 2020 General Election.  With a lot of misinformation circulating about this election, the LWVNV encourages voters to fact check inform...

The League of Women Voters of Northern Valley celebrates Women’s Equality Day on August 26, 2020 and the advancements made towards achieving political, economic, and social equality.  The date commemorates the 100th anniversary of the adoption of the 19th constitutional Amendment, granting women the right to vote in the United States.  During February of this year, Leagues nationwide als...