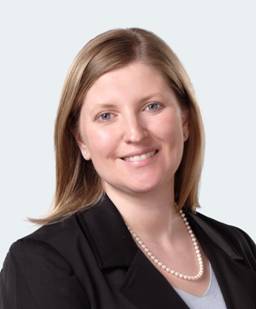 The National Association of Women Lawyers (NAWL®) honored its 2010 Awardees and installed its new officers and board members at its Annual Awards Luncheon in New York City. Kristin D. Sostowski, an associate in the Gibbons Employment Law Department and member of NAWL's Program Committee, as well as Co-Director of Best Practices for its New Jersey chapter, received the Virginia S. Mueller Outstanding Member Award.

At Gibbons, Ms. Sostowski defends companies and individuals who have been sued personally in discrimination, harassment, retaliation, whistleblower, wrongful discharge, tort and contract, and restrictive covenant cases. She appears before federal and state courts, civil rights agencies, and alternative dispute resolution venues. She counsels employers on a wide range of employment and labor law issues, including the development and implementation of employment policies and handbooks, accommodation of employees with disabilities, family and medical leave issues, wage and hour laws, employee terminations, and general employee relations matters. Ms. Sostowski is also a member of the Gibbons' E-Discovery Task Force, handling all aspects of electronic discovery in employment and commercial litigation matters and regularly advising employers on e-discovery and document retention best practices, electronic communications policies, and the management of employee usage of electronic systems.

This email address is being protected from spambots. You need JavaScript enabled to view it.
973-376-6777
871 Mountain Avenue, Springfield, NJ

The New Jersey State Federation of Women's Clubs (NJSFWC) recently announced its selection of Gilda's Club as its special state project for 2010-2012 at its 116th Annual Convention in Atlantic City.

NJSFWC is the largest volunteer women's service organization in New Jersey with 280 clubs statewide. The entire Federation votes to designate a specific charitable organization as the beneficiary of its fundraising, advocacy and volunteer efforts every two years. The organization provides opportunities for education, leadership training and community service through participation in local clubs, enabling members to make a difference in the lives of others.

"We are honored and deeply grateful to be the NJSFWC's state project," said Dyane McMahon, director of development at Gilda's Club Northern New Jersey. "We are so fortunate to have the time and talent of this energetic group as a resource for the next two years."

Gilda's Club Northern New Jersey led the initiative for the designation and was one of 60 organizations that applied for the 2010-2012 state project bid. In a rigorous selection process, the 60 applicants were narrowed down to three. The entire Federation then voted to select one beneficiary. Gilda's Club NNJ will work collaboratively with sister organizations, Gilda's Club South Jersey and the Wellness Community chapters in Bedminster and Eatontown, NJ, to implement a two-year, statewide initiative.

"The New Jersey State Federation of Women's Clubs is thrilled to be partnering with Gilda's Club. Our entire membership is behind this designation and eager to begin helping this most worthwhile cause," said newly-elected NJSFWC President Patricia S. Whitehouse.

Gilda's Club Northern New Jersey is a cancer-support community serving 12 counties in North Jersey as well as southern Rockland County, and is part of an international network of affiliate clubhouses anchored by Gilda's Club Worldwide. All services at the Hackensack-based clubhouse, from lectures and workshops to support groups and social events, are open to anyone – men, women, children and teens – who has been touched in any way by cancer, and are completely free of charge. For further information or to make a donation, visit www.gildasclubnnj.org or call (201) 457-1670.

More than just site design - search marketing, social networking, local maps and web apps that put your business ahead of the competition on the Web.

Some 45 years ago, Barbara Spector Yeninas, a woman literally floating around in what was truly a man's world-ocean shipping-took a risk. Seeking a short-term step on her career path from maritime journalist, she established BSY Associates Inc., a woman-owned public relations agency at a time when females were rarely seen on the waterfront. BSYA started as a PR and advertising agency, quick...

What we are doing The Garden State Woman Education Foundation (GSWEF- 501c3) has created a new initiative, GOOD DEEDS. This launches GSWEF as a leader in galvanizing the support of women in business to promote GOOD DEEDS, reaching out to help other people.  GOOD DEEDS is our fundraising name for the idea. Donations can be made on www.gswoman.com. We have a fantastic new project that needs se...

All the Women in My Family Sing: Women Write the World — Essays on Equality, Justice, and Freedom. Women of color have long been silenced even while social movements have flourished. All the Women in My Family Sing amplifies the voices of women and shows what it means to be a woman of color in today's world. Sixty-nine authors, including America Fererra and Samina Ali, lend their voices to broade...