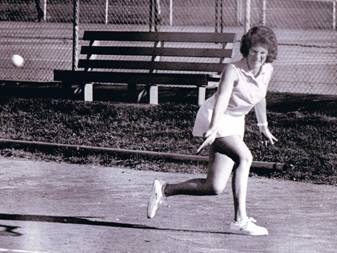 She was shut out. The coach refused to let her try out, citing a New Jersey Interscholastic Athletic Association rule that prevented girls from participating with boys in non-contact sports. Seldin's mother responded by serving up a lawsuit, taking the dispute from the tennis court to federal court.

The Seldins turned to the ACLU of New Jersey, who assigned the case to two young attorneys who took a special interest in gender discrimination cases – future Supreme Court Justice Ruth Bader Ginsburg and Annamay Sheppard. Midway through the trial, the New Jersey Interscholastic Athletic Association changed its rule and Seldin was allowed onto the team.

The lawsuit is just one of countless cases the ACLU-NJ has handled that have broken down barriers, evened the playing field or protected the rights of women since it was founded on June 16, 1960. In 50 years, the ACLU-NJ has paved the way for other female athletes such as Seldin to gain equal footing on sports teams, it has fought for a woman whose car insurance was canceled because she was living with a man out of wedlock in 1974 and it forced Princeton University to open its all-male eating clubs to women in 1992.

"When it was founded 50 years ago, women had few rights and opportunities and needed the permission of their fathers or husbands for many personal and economic choices," said ACLU-NJ Executive Director Deborah Jacobs. "Although women's legal protections have improved immensely, we continue to stand guard and fight fresh assaults on women's reproductive freedom and we will continue to protect the rights of women in the workplace and beyond."

In some instances, laws protecting women in New Jersey have been more progressive than the rest of the country because of the ACLU-NJ.

In 1970, the ACLU-NJ represented a group of doctors who had lost their licenses for performing illegal abortions, in a case that challenged New Jersey's abortion statute. In 1972, a three-judge federal panel struck down the state law, calling it unconstitutionally vague and that women have a right to determine whether to have a child.

The decision was issued one year before the U.S. Supreme Court issued its ruling in Roe v. Wade.

In 2000, the state Supreme Court issued a ruling in favor of the ACLU-NJ and Planned Parenthood, striking down a "parental notification" law that required doctors to get approval from parents before they perform abortions. Most states require one or two types of parental involvement.

In cases, such as Seldin's, the battle for women's rights had a profound effect later in life. Seldin, who was a ranked junior tennis player, rightfully earned a spot on the Teaneck men's tennis team, but quit because of the taunting by her coach and teammates. She went on to play tennis at Syracuse University, where she pressured the school's administration to provide scholarships for female athletes.

Seldin was tapped for the cause because she had already proven to be an ace on the courts and in them. Once again she prevailed and went on to become the first female student-athlete to win a scholarship at Syracuse, opening the doors for many more to follow.

"I believe in the ACLU and support it because everybody should have the same rights," said Seldin, 53, who continues to play tennis. "I think having an organization like the ACLU is important. Who else could you go to for help?"

The ACLU-NJ is celebrating its 50th Anniversary with a night of laughter at The Heldrich Hotel in New Brunswick on Thursday, Nov. 4. Please visit www.aclu-nj.org/events for more information and to RSVP to Freedom Fest.