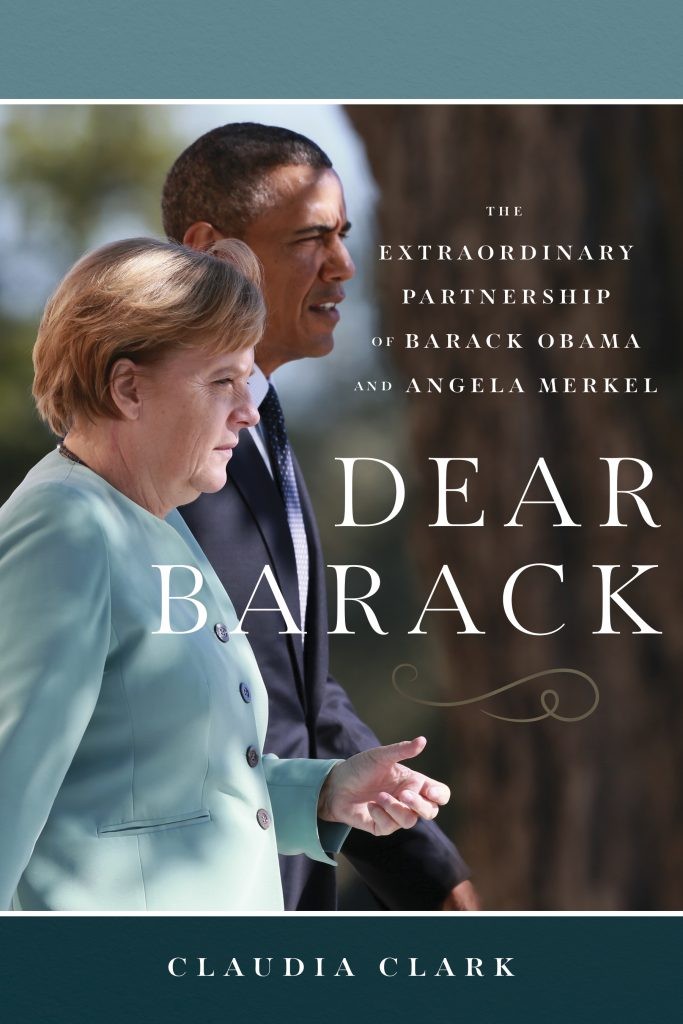 Clashes between extreme thinking and opposing beliefs are one of the obvious reasons for today's negative and chaotic political climate. But one significant factor—that goes unseen at times—which contributes to the mood of the political climate is the quality of the relationships between government officials. When the alliances between countries and world leaders are strong and sound, society will be more at peace.

Author, speaker, and activist Claudia Clark dives deep into the importance of such alliances in her book Dear Barack: The Extraordinary Partnership of Barack Obama and Angela Merkel. Clark discusses the relationship between two of the world's most influential leaders in her thoroughly researched book. While they had their differences, as the first black president and first female chancellor, Obama and Merkel shared a strong belief in democracy. In our interview, Clark introduces her book and provides insight on how we can learn from this extraordinary partnership.

Clark began by explaining that the main difference between them is that they belonged to two opposing political parties: Merkel was the head of the center-right party in Germany and Obama was the head of the center-left in the U.S. They had differences of opinion on a lot of policy issues. They were also different personality-wise. Obama was a very charismatic speaker and could get nearly everyone listening to his speech excited to follow, whereas Merkel was the opposite. She wasn't known to be a great public speaker, but behind the scenes, she could do the "arm wrestling" and could get people to negotiate and get deals done. They each had respect for each other and their countries. Merkel had come from former East Germany and firmly believed that her freedom was a result of the United States. Obama had a lot of respect for Germany and respect for a woman that had been raised in Germany and became the first female chancellor. Because they had great respect for each other, they were able to put their differences aside and accomplish a lot of good things.

In a way, Clark continued, these factors did contribute to their ability to get along. Merkel was the first female chancellor of Germany and was the head of the conservative party, so she defied a lot of gender stereotypes. Many people didn't take her seriously because she was a woman. Something Clark delves into further in her book is that Merkel has a photographic memory, a Ph.D. in physics, and was a skilled researcher. Yet, people still dismissed her. Obama was one of the few people that actually did take her seriously. He welcomed her and he wasn't threatened by strong, independent, and brilliant women. Additionally, the fact that they were the first, Merkel being the first female chancellor of Germany and Obama being the first black U.S. president, there were a lot of commonalities there and they each knew they were under scrutiny because they were the firsts. This helped them form their bond.
Merkel and Obama didn't agree on a lot of things politically. Clark explained that although they didn't agree on many things, they knew how important it was for two leaders of different nations to show a united front because they firmly believed in the role of democracy. And so, they put their differences aside and worked together on important issues, such as the Paris Climate Accord and the Iran Nuclear Deal. These issues were dealt with, in a large part, due to the work that Merkel and Obama have done.

Clark first pointed out two important aspects of their partnership. The first is that Merkel and Obama did not agree on a lot of things. They disagreed on how to handle situations, but their overall vision was the same. They knew that the world depended on them and the other nations to come together and find solutions. And so, they put their differences aside in order to follow their vision of democracy. This, Clark continued, is important for other government official partnerships. It is okay to have disagreements. A relationship can still be formed based on trust and respect without having to agree on everything. Clark mentioned that this idea is what prompted her to write her book. She was saddened and disheartened when she saw the level of animosity on both sides. For example, if someone is a democrat and a republican has an idea, or vice versa, they just shut it down without considering the other side. She thinks this is dangerous and she believes that Merkel and Obama's partnership can teach us to avoid this danger.

The next thing Clark pointed out, which she discusses further in her book, was that Merkel and Obama had their ups and downs. They didn't start off as best friends, and even as their friendship gained momentum, there were difficulties. For example, the scandal where it was revealed that the Obama administration had illegally wired-tapped Merkel's cell phone caused a lot of problems with the global community. The Obama administration was wrong for doing this. But it is important to note that when he realized how damaging this was to the relationship between Merkel and Germany, he started to make amends and policies to make it right. This scandal occurred during the time when Putin started annexing Crimea. And while Merkel wasn't happy with what Obama had done, she knew that the world was looking toward them and she had to put her personal gripe with Obama aside to look at the larger global picture. What ended up happening was that after every disagreement the two of them had, they always ended up being stronger and better partners after the fact.

"We live in a globalized world, whether we like it or not," Clark began. When she wrote her book, it was during the beginning of the Trump administration. She saw what was happening in the world with major political issues where many leaders were running on isolationist principles. These leaders feared immigrants and wanted to do everything possible to keep borders safe. Terrorist attacks and war can occur very easily nowadays. For example, cyber-attacks and hackers can put our computer systems at risk. "Now more than ever, world leaders need to be able to rely on each other to help protect the integrity of democracy," Clark stated. All nations must work together and must be able to trust each other. We seem to be moving farther and farther away from trusting one another. And so, her main hope is that readers will see the danger in this distrust and see how we can learn from the relationship between Merkel and Obama.

For more information on Claudia Clark, and to purchase her book, Dear Barack: The Extraordinary Partnership of Barack Obama and Angela Merkel, visit claudiaclarkauthor.com.