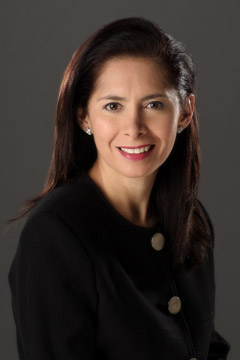 Jackie Ehlert-Mercer
Ramapo College in Mahwah, NJ and The White House in Washington, DC have something in common. The commonality is an edible garden. The Presidential wives, Michelle Obama and Jacqueline (Jackie) Ehlert- Mercer, share a common goal – to improve the eating habits and health of children and adolescents through education.

In 2006, Dr. Ehlert-Mercer founded the Havemeyer Edible Garden at Ramapo College, where college students learn nutrition through a living curriculum. Her research interests are centered on the eating and nutrition behaviors of college students as well as food ecology and sustainable food systems.

Realizing that changing eating habits of college students would be a challenge that required innovation in the curriculum, Ms. Ehlert-Mercer designed a course for freshman that would incorporate gardening. As part of a freshman course at Ramapo, students were required to participate in the planting and harvesting in gardens next to the President’s residence. Starting with an understanding of the needs of plants and the variety of soil they preferred to actually eating a tomato they had grown were hands on experiences of the students. Subtle awareness of the nutritional advantages of baked chicken versus fried chicken were incorporated into the curriculum.

Ingenuity is not new to Ms. Ehlert-Mercer. After completing her Dietetic Internship at Mount Sinai Hospital in Toronto, she wanted to work there. There were no jobs available. She saw a need and was able to convince the hospital to let her test her idea. The idea was to be able to offer kosher catering and meals to those visiting patients. In addition, there was no facility offering early morning coffee and pastries for doctors and visitors in the hospital. She convinced the hospital administration that both ideas would be good public relations as well as a source of revenue. She was successful in both endeavors and created a job for herself at Mount Sinai where she worked for twoyears. She was recruited by St. Paul’s Hospital in Vancouver to head its Diabetes TeachingCenter. In addition to her work at the hospital, she was teaching at University of the Fraser Valley and Douglas College. She then moved to Vancouver Community College as Director of the Hospitality programs and was sought to consult to hotels and other corporations to make their menu offerings lighter and healthful. Eventually, she started her own consulting business to corporations on dietary issues.

Returning to Toronto upon her marriage to Peter Mercer, Ms. Ehlert-Mercer kept her consulting clients in Vancouver as well as building a consulting practice in Toronto. Her practice continued to flourish as did her desire to teach good eating habits. She realizes that it will take generations to bring about change.

Moving to New Jersey when her husband was named President of Ramapo College gave her the opportunity to impact young people directly. In conjunction with her Dissertation topic: Student Nutrition Attitudes, Action, Knowledge and Skills; A Nutrition Program Tailored to the Needs of Predominately Black and Hispanic College Freshmen in pursuit of a Doctorate from Columbia University Teachers College in New York, she created the Havemeyer  Edible Garden. Havemeyer is the name of the President’s Residence at Ramapo. With the help of volunteers and the financial support of benefactors, the Havemeyer Edible Garden became a reality. Each spring volunteers and students prepare the garden for planting. For some it is a requirement of their class work, for others it becomes a life changing experience. The realization that the earth is the real source of bounty is an eye opening experience for some. The connection between earth and water in the plant life processes which produces edible foods is often a connection about which young people are unaware.

Jackie Ehlert-Mercer is a member of Les Dames d’Escoffier and founder of its Toronto chapter in Canada. An organization that educates and mentors women in the culinary professions, it is the only such group in the world, comprised of professional women leaders in the field of food, fine beverage and hospitality.

Dr. Ehlert-Mercer is a research abstract reviewer for The Society for Nutrition Educators Annual Conference. She is a published author, teacher and lecturer and an Adjunct professor in the Master’s of Nutrition Science Program at Montclair State University as well as a sessional lecturer and nutritional counselor at the University of  British Columbia in Vancouver, Canada.

In recognition of her efforts, she received the Helen Ducombe Award from the Women’s National Farm and Gardening Association in 2009.

For the past two years, she has chaired the nutrition and food security network for Dietitians of Canada. This active network is comprised of 177 registered dietitians. During her tenure, the network has implemented a survey which shaped the network’s strategic objectives, a quarterly newsletter and the development of an evidence based pathway on food security for dietitians to include into their practice. She also serves as the Dietitian’s of Canada representative to Food Secure Canada and is co-authoring the position paper on obesity and food insecurity.

On April 1, 2010, she was elected to serve as the Sustainable Food Systems Division Chair for the Society for Nutrition Education in the United States. This two-year term starts in July.