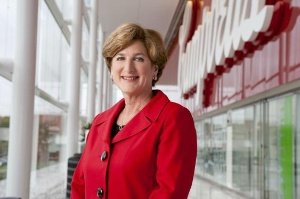 One of Garden State Woman's "Woman of the Year" alumni, Denise Morrison, has been formally named Campbell Soup's next president and CEO.

Denise was among the women honored at the 2007 Woman of the Year Luncheon, in the Corporate category.

Nominations are now being accepted for the 2011 Woman of the Year. Information and a nomination form are available here.

The 57-year-old Campbell executive will become the first woman to run the world's largest soup maker. The Camden company's board announced yesterday that she will take over Aug.1. Campbell said she was next in line last year when Douglas Conant announced he would step down this year after more than a decade leading the company.

Denise joined Campbell in April 2003 as President-Global Sales and Chief Customer Officer, and was named President-Campbell USA in June 2005. She was appointed Senior Vice President and President-North America Soup, Sauces and Beverages in October 2007. She led the Campbell USA, North America Foodservice, and Campbell Canada businesses, representing approximately $4.9 billion of the company's net sales and nearly 90 percent of the company's profits.

Denise's full bio is available on the Campbell Soup website.