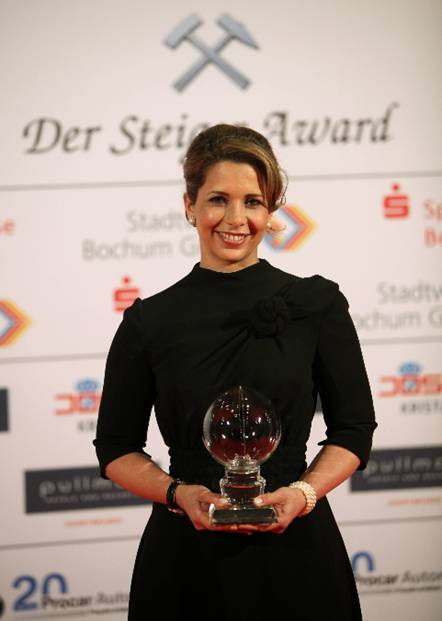 HRH Princess Haya Al Hussein received the Steiger Award recently at a gala dinner at Bochum’s Centennial Hall in Germany in recognition of her achievements in the field of sport.

The Steiger Award is named after ”Der Steiger” (The Miner) and symbolizes traits that are associated with miners in the North Rhine-Westphalia region of Germany — straightforward, open, honest, fair and tolerant. It also stands for reliability, loyalty and cooperation in good times and in bad. The award is given annually to personalities who are recognized for their work in fields of music, sports, media, environment and film.

“The virtues of the Der Steiger are the same values that we cherish in sports. The only thing that matters in sports is your performance. And a winning performance isn’t measured just by medal counts. It is measured by behavior,” stated Princess Haya upon receiving the Award. “The equality of competition can be particularly empowering for women and young girls. For far too many of them, sport is the one opportunity they have to break free from societal norms that stifle their creativity, their passion and their dreams."

The former Olympic athlete and UN Messenger of Peace was honored for her work as president of the International Equestrian Federation (FEI), as a member of the International Olympic Committee (IOC) and for her sport-related humanitarian efforts. She has worked with the UN’s Sport for Development and Peace program to use sport to improve the lives of refugees and impoverished youths.

Princess Haya, the wife of His Highness Sheikh Mohammed Bin Rashid Al Maktoum, Vice-President and Prime Minister of the UAE, Ruler of Dubai, competed for her native Jordan in equestrian events at the 2000 Olympic Games in Sydney. She is the daughter of HM Late King Hussein Bin Talal of Jordan. She became a UN Messenger of Peace at the request of Secretary-General Ban Ki-moon in 2007.