“I work like a slave but love what I do.” 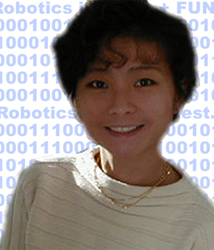 As Elizabeth Mabrey said as we were wrapping up our conversation. “ I work like a slave but love what I do. It’s boring not to know things.”

Elizabeth has developed a system to make lemonade from lemons.  Basically frustrated  with the public education system in the , she fought many battles with administrators and teachers while her two sons were younger. For 3 years, after a stint in the local public middle and grammar school system, she had both boys attend   before switching them back into which she considers the best of the public schools she has experienced.

At one point in our recent discussion with she mentioned that she finally came to view our public schools as providing day care services while the parents work. Following family dinners together - she always thought they were important – added to her sons’ education through home schooling. The approach obviously worked as ’s two sons are now engineering majors at U Penn and .

is originally from and clearly recognizes the weaknesses in the Asian approach to education. The term she used to describe the rigid, non flexible teaching style in Asia with up to 50 students per class is “stuffing the duck” which basically means jamming as much information as possible into the kids without really ever teaching them to think creatively and outside the box. She believes the system does a better job of teaching creativity but doesn’t do nearly well enough helping students develop the necessary discipline to capitalize on their creative thinking skills.

has her undergraduate degree from and her Masters from Drexel where she studied Computer Science. For the first 20 years of her working career worked the 60-70 hours a week necessary for a woman with a passion and interest in technology to advance in software development with leading companies such as BEA.

Finally, in 2004 frustrated about the education system the way she was experiencing it for her sons, decided to leave the corporate cocoon and start her own business, Storming Robots, Engineering for Kids.

I learned about and her robotics program for kids in grades 3 through 12 from my husband Jack. He learned about and her work with young people while interviewing a home-schooled young man applying to MIT. He was so impressed with the college applicant who was enrolled at Storming Robots and the obvious impact that was having on him that he suggested I visit with to learn more. I wanted to assess whether this program might be an important resource for other families with their own young kids.