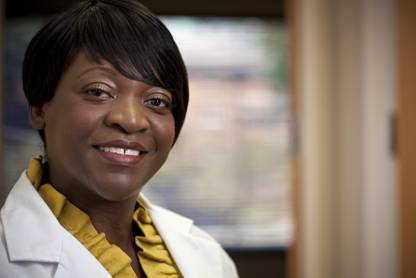 Dr. Laverne Mensah of St. Clare's Health System is a Garden State woman whose work not only saves the lives of  women with cancer of the reproductive tract, but also minimizes the time they have to spend away from their daily lives for surgery and recovery.

As one of the first gynecologic oncologists to complete 20 surgeries using the FDA-approved da Vinci robot, Dr. Mensah is considered an innovator in gynecologic robotic minimally invasive surgery. The robotically-enhanced surgical instruments she uses allow for greater precision during operations, and, consequently, she is able to provide her patients with shorter hospital stays and quicker recovery times, as well as less pain, risk of infection, and scarring. Treating and helping women is one of the biggest reasons Dr. Mensah went into the field of gynecology – and she loves every minute.

Patricia Korpos, a town clerk for Mine Hill, is one Garden State woman who benefited from Dr. Mensah's expertise and warmth. When Patricia started bleeding last November, 14 years past menopause, she was diagnosed with cancer and required a hysterectomy. Having watched her mother die of cancer, Patricia expected the worst. In fact, her daughter initially suggested going to Memorial Sloan-Kettering Cancer Center. But Patricia met with Dr. Mensah on her doctor's recommendation, and was so impressed with Dr. Mensah's kindness and expertise that she didn't want to go anywhere else. Her results supported her decision: Within a week, she felt well enough to think about going back to work. And, since she'd had a small surgery in the same area a few years prior and experienced tons of pain, she was shocked at how minimal the pain was following this surgery. She says she'd recommend Dr. Mensah to anyone.

Dr. Mensah earned her undergraduate degree from Massachusetts Institute of Technology and her medical degree from Washington University School of Medicine. She completed her residency in obstetrics and gynecology at Wayne State University's Hutzel Hospital, and completed a fellowship in gynecologic oncology at Sloan-Kettering. In addition to serving in several professorial roles, she has been a federal expert in the Division of Cancer Prevention and Control at the Centers for Diseases Control and Prevention.