Interview with Best-Selling Author Nora D’Ecclesis. “Zen Rohatsu” is the Path to Equanimity. 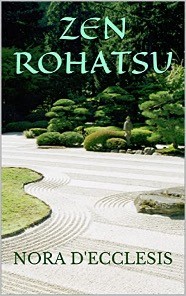 Being stressed and anxious, feelings many can relate to, can be taxing and put a damper on one's motivation and happiness. But there is an answer to dealing with life's stressors, and that is by cultivating a mindfulness practice. The Garden State Woman Education Foundation (GSWEF) spoke with best-selling author, Nora D'Ecclesis, about her new book, Zen Rohatsu, a book that discusses all about the ancient practice of Zen. Zen Rohatsu became a best-seller on Amazon within the first 24-hours upon being published. In her best-selling book, she provides the history of Buddhist enlightenment and relays her own extensive spiritual experience. A book that is welcoming to anyone at any stage of their meditation journey, Zen Rohatsu helps readers develop and enrich a deep sense of mindfulness.

D'Ecclesis was born, raised, and educated in the Garden State, and holds New Jersey deeply in her heart. Prior to becoming a writer, she set up retreats where she would teach woman about meditation, yoga, and mindfulness. Her retreats were always set at the Jersey Shore, in Cape May and Long Beach Island. Through her books, expertise, and experiences, D'Ecclesis empowers her audience to live life more intently. In our interview, D'Ecclesis discusses the meaning of Zazen, its importance, and insightful advice to those looking to start their spiritual journey.

"Years and years of sitting Zazen," D'Ecclesis began, and continued by explaining its meaning. Zazen is a type of meditation that comes from the Zen Mahayana tradition and originates from Japan. She began her Zazen meditation practice in graduate school, where she discovered its power to bring her equanimity. Zazen meditation has helped her begin her day feeling balanced and relaxed. When the COVID-19 pandemic hit, many of her friends and colleagues suddenly became more interested in learning about her Zazen practice due to her calm transition into such a drastic change society was going through. They encouraged D'Ecclesis to write a book about Zazen, which led her to write and publish Zen Rohatsu.  D'Ecclesis first explained that the concept of mindfulness comes from the primary source, the Buddha, when he wrote the Nobel Truths. Mindfulness is looking at our feelings that come from our thoughts and emotions in a non-judgmental way and simply accepting them as they are. If our feelings emerge as anxiety, stress, and fear, which has been ubiquitous for many during the pandemic, then they will manifest as what she describes as interoceptive anxiety. Thus, mindfulness, D'Ecclesis continued, helps keep us balanced in equanimity and leads us to what the primary source teaches on staying in the moment. D'Ecclesis says that because mindfulness is so effective, she found it extremely important to share her experience and guide others, which she does in Zen Rohatsu and in her last three books. Developing mindfulness, a newfound awareness of the present moment, is the substance of what keeps us calm and balanced.
D'Ecclesis said that one source of tension that arises from those that are hesitant to begin a mindfulness practice is from having a certain perspective on what mindfulness is. That perspective being the confusion between spirituality and religion. Some may see mindfulness as strictly part of the Buddhist religion. In Zen Rohatsu, D'Ecclesis makes it clear that a meditation practice stands alone. There are various different types of meditations, and anyone can explore them and choose the one that is best for them. Anyone can meditate and be mindful without it interfering with any other beliefs they have or religions they follow. D'Ecclesis summarized a quote by the Dalai Lama to highlight this point, "Keep your religion. This is a spiritual practice." In many countries, the Zen practice is religious. But it is important to understand that a Zen practice is also simply just sitting and being present. D'Ecclesis pointed out that she has had no issues having Zen Rohatsu placed in libraries, as the topic of the book is not in any way controversial. It is a book about her experience and a guide for those interested in the practice.
What D'Ecclesis would like readers to take from Zen Rohatsu can be summed up in one word: equanimity. She says that equanimity is what will create the life where you can, "jump out of bed every morning with a smile on your face." In a life where equanimity is practiced, she explained, there will never be the chaos of life's ups and downs because it will provide a person with the balance needed to calmly reflect on the situation at hand, rather than getting caught up in circumstances one has no control over. For instance, if you face a sudden tragic event, equanimity will prevent you from becoming morbidly depressed. If you face a sudden positive event, equanimity will prevent you from making a rash and thoughtless decision. Equanimity will keep you balanced, allowing you to experience life without getting pulled by the tidal waves of stress and anxiety that you will inevitably face.

Whether you're a beginner or an advanced meditation practitioner, Zen Rohatsu will provide significant historical context of the ancient practice and deepen your sense of mindfulness, allowing you to live life truly in the moment.

For more information about the author, visit noradecclesis.com, or follow her on Twitter at @DECCLESIS or on Facebook at Nora D'Ecclesis. Zen Rohatsu can be purchased on Amazon.