History does have a way of repeating itself.  A tasting took place in Princeton on June 8, 2012 modeled in every detail after a wine-world altering event that ocurred in Paris on May 24, 1976.  Many of you may have heard of The Judgment of Paris.  If not, a small wine shop owned by a British man, Steven Spurrier, held a tasting to compare the well-respected French wines against the not-so-well-known California wines.  If it were not for one man, George M. Taber, a Time magazine reporter, the event would have surely been swept under the rug.  Although many from the press were invited, all invitations were declined and only Mr. Taber attended.  Luckily, he happened "not to have anything better to do that day".  Simply put, California stole the show placing first in both red and white.  The event is well documented in Taber's book, Judgment of Paris and very loosely in the movie Bottle Shock.

This time it was The Judgment of Princeton where top French wines were compared against top NJ wines.  The event was held by the American Association of Wine Economists (AAWE) with Mr. Taber acting as facilitator.  As in Paris, nine judges tasted 10 Chardonnays (4 French and 6 from NJ) and 10 Cabernet Sauvignons or Bordeaux blends (4 French and 6 from NJ).  The wines were randomly ordered.  The outcome was not as shocking as Paris but impressive just the same.  In the white wine tasting, three NJ Chardonnays placed second, third and fourth with one French Chardonnay placing last.  In the red tasting, a NJ wine came in third. The results are below and note that the French wines range in price from $50-$400 where the NJ wines do not. 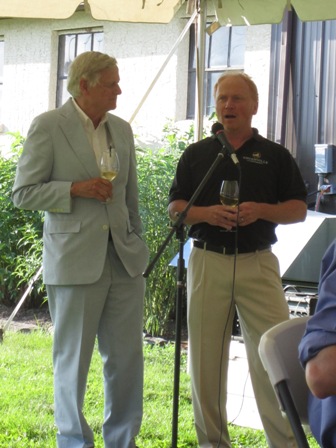 I, an admitted wine snob, must painfully concede that NJ wines have increasingly improved in quality with white wines taking the lead.  I had the pleasure of tasting the Unionville 2010 Single Vineyard Chardonnay, the second place winner, that same evening and was pleasantly surprised to find the wine quite enjoyable.  Other notables I tasted that evening were the 2011 Pinot Grigio and the 2010 Big O Montage.  Although my wine preferences lie elsewhere, I would encourage us all to visit the wineries.  Besides supporting our NJ wine industry and our farmers, it is a beautiful day in the countryside.  Call your friends and catch an event at one of the NJ wineries.  It is worth taking a look at the winery schedules posted by the Garden State Wine Growers Association.  Cheers to NJ!

George M. Taber's book, Judgement of Paris: California vs. Paris and the Historic 1976 Tasting that Revolutionized Wine, as well as his new book A Toast to Bargain Wines: How Innovators, Iconoclasts, and Winemaking Revolutionaries Are Changing the Way the World Drinks are available at amazon.com.

Maria Baniel is a Wine Correspondent for Garden State Woman.  She is also a Wine Consultant and offers affordable educational wine seminars and tastings for private, corporate and fundraising events.  To schedule your next wine experience, contact Maria at piemonte4@comcast.net.