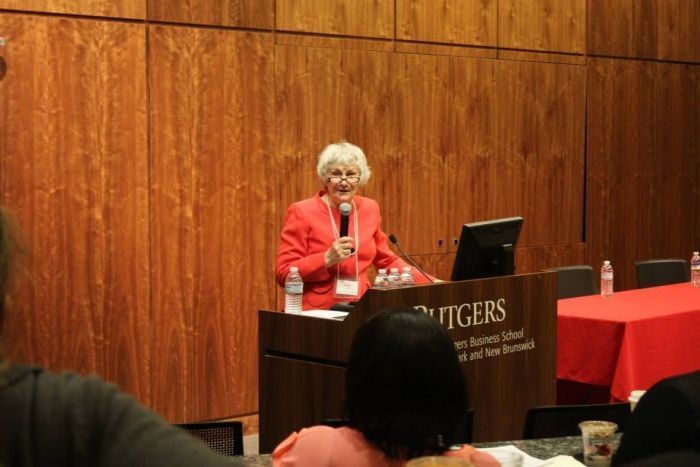 Students attending will have the opportunity to:  meet, talk with and learn from women volunteers who are successful women in business and business school women students; learn more about Rutgers Business School, Newark, the leading business university in New Jersey; learn about the scholarship and mentoring support available from the Garden State Woman Education Foundation.  High school guidance counselors are invited to attend
Keynote speaker is Kaity Rodriguez,MSW,Founder and Executive Director of The Role Model Group and former Miss New Jersey.
A panel of Executive Women will include Marjorie Perry, President of MZM Construction Company in Newark, and Karin Aviles, Chief of Staff to the President of Verizon Enterprise Solutions. Isobel Wayrick of Mars International will moderate the panel.  The women will describe their career path, the challenges they have met and their advice to young women.

Welcoming remarks by Judy Chapman, Garden State Woman Education Foundation Founder and by member of leadership team at Rutgers Business School on Why to Pursue a Business Education and Career.

Calling all New Jersey businesswomen who strive to be leaders and rainmakers, this is an excellent opportunity for you!

Please join Citrin Cooperman for the 2014 New Jersey edition of Driving Your Business: Women at the Wheel breakfast seminar, featuring a panel of extraordinary women who have demonstrated a distinguishing approach to driving their businesses. Breakfast will be served.

The seminar features five exceptional women executives, with diverse industry backgrounds, discussing the skills and philosophy that propelled them to the top. Topics include: 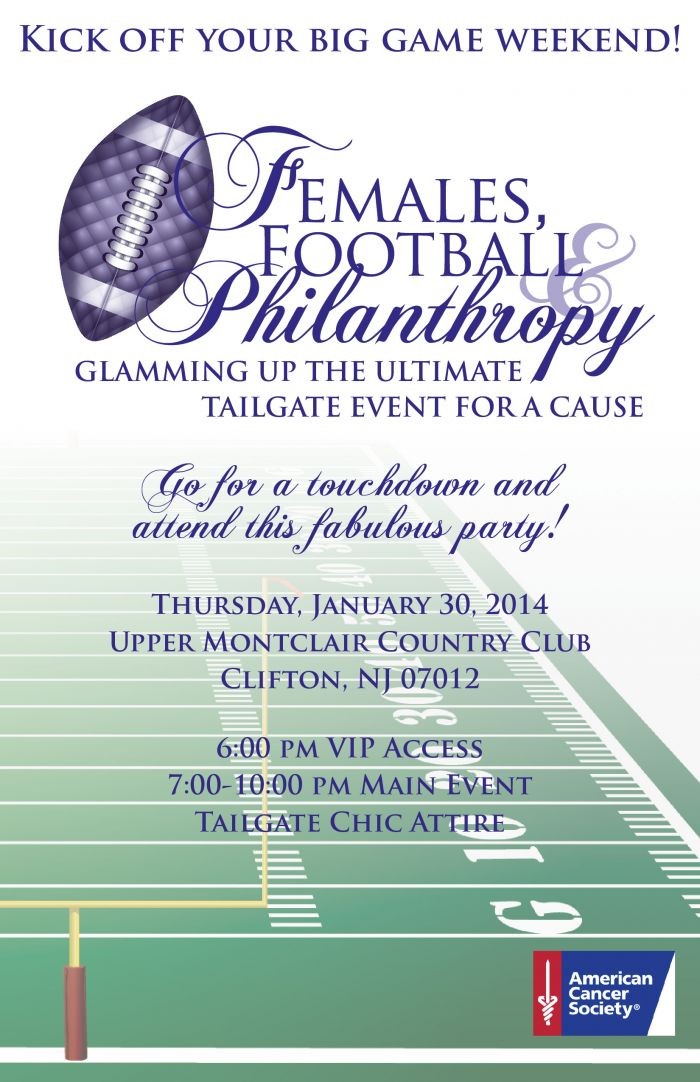 Finally! An event that breaks down the stereotypes of women and sports—and as an added bonus—is sure to even make your husband jealous! (Start making up your touchdown celebration now).

Allison Sargent, Founder of Allison Sargent Events, is at it again with another innovative and exciting event—Females Football & Philanthropy 2014. The "Big Game" has set the stage for a glamorous spin on your typical football and tailgating experience. Best described as "Glamming up the Ultimate Party for a Cause," this extraordinary event will feature gourmet tailgate cuisine, "A" list stars, celebrity chef grilling demos, boutique shopping, a silent auction, special football toss training session with professional football players, and opportunities to meet the most outstanding women.

So, put on your most chic tailgating attire and get ready to meet the most noteworthy women in business, the arts and entertainment, news media, government, healthcare, education, sports, and many other important fields. Not to mention, this is all for a good cause! Proceeds will go to The American Cancer Society.

This pre-game celebration for women by women will be held at the Upper Montclair Country Club on January 30, 2014 from 7:00pm-10:00pm. To learn more about planned activities and to purchase your tickets, visit the event's website at www.femalesfootballphilanthropy.org. Hope to see you there!

We have a friend who wishes to remain a mystery but we want to tell you about her anyway.

She is an exceptional coach helping executives and other non-political leaders sharpen and improve their public speaking and presentation skills. She has been doing this for years relying exclusively on referrals. In fact she will only consider providing coaching to people she knows already or who are referred by others whose judgment she respects and values.

Most of us know the fear of standing in front of people and sharing our expertise, knowledge and recommendations. Our good friend helps people deal with and overcome these fears by coaching them to develop the requisite skills they need to succeed presenting their ideas in all contexts.

She delivers her coaching in three basic ways:

Our friend has lost her appetite for travel so she basically keeps her plate full just serving clients in the metro area and staying in touch with other prior clients around the world by phone and email.  My husband Jack recently spent several hours with our new friend learning about her practice.  He came away raving about her capabilities.

Judy Chapman, 2012 United States Small Business Association (SBA) Champion of Women in Business, cordially invites you to attend the first of a series of programs sponsored by the Garden State Woman (GSW) Institute.

In response to professional women and entrepreneurs who have indicated that they would like to understand how to use social media to build a strong network for business and career development as well as a device for personal growth, GSW has designed a workshop that will focus on the opportunities and challenges of effectively creating, owning and maintaining a social media platform.

Social Media can often be confusing.  Where do you start?  Which social media sites will work best for you and your career and business?  How safe is your information?  Learn the answers to these and other burning questions as we explore the benefits and risks of social media.

GSW will be joined by David Deutsch of SynergiSocial, and IT Executive Ken Morris for an educational networking session as we explore the benefits, risks and "how to's" of social media.

Bring your laptops or iPads to get started!

My husband Jack Killion teaches at Fairleigh Dickinson University (FDU) in Madison. It is very much a very part-time avocation where, as an adjunct professor, he recently has been teaching Corporate Innovation for evening MBA students in the FDU Business School. Watching him come home so energized from his classes it occurred to me to suggest more qualified "Garden State Women" think about enriching their careers and giving back as adjunct professors in areas that fit their areas of interest, education and experiences.

Being a full professor requires having a PhD. However, with his Masters from MIT's Sloan Business School, Jack can teach as an adjunct professor which he has also done over the past 20 years at Rutgers and Montclair State University as well as at FDU.

Jack's current class includes 10 MBA students ranging in ages from early 20's to mid 40's. Most are holding various types of jobs in addition to working toward their MBA at night and some weekends. They are making sacrifices to raise their educational credentials and, according to Jack, are terrifiic to work with, smart and highly motivated.

Like many of the women in our Garden State Woman audience, Jack has a ton of real life business experiences he can share with his students. Through his extensive network he can also reach out to exceptional guests whom he brings into his classes almost every session.

Teaching at the university level as an adjunct professor hardly qualifies as a get rich scheme. Jack earns about $2500 for teaching two nights a week ( 3.5 hours per class) for about 15 weeks. Plus he puts in plenty of time before and after every class getting ready and then evaluating the students' papers, presentations and tests. But the things he learns from the students and from the guests he brings to class and the relationships he builds with the students and other faculty members is a huge payoff in Jack's mind. The personal satisfaction he gets from having a "great" class session is obvious when he walks in the door at the end of the night.

Susan P. Ascher, Founder, President and CEO of The Ascher Group, a contract staffing firm headquartered in Roseland, NJ, was a guest on News 12 New Jersey, “It’s Your Money.” The show aired various times throughout the weekend of October 24th and 25th.

Susan spoke on The Portfolio Career – a career option where a person combines their skill sets and passions with part-time, contract, e-lance and free-lance positions. As she stated on the show, “The portfolio career model lends itself to the younger generation as well as the Baby Boomers. The Millennials -- teenagers and young people in their 20s – know how to deconstruct the work they have done and the skills they have. They also see their outside activities as potential income generators. They are young and wary of the corporate world. The Baby Boomers find the jobs they have done are outdated. They are facing tremendous competition from Generations X, Y and the Millenials. We can call it discrimination or we can call it reality. Boomers can also look at their interests and the things in their lives that they are passionate about and re-invent they way they make a living. For reasons of need and for reasons of desire, people are going to continue to work well beyond their normal retirement age.” As she stated emphatically, “This is a new segment of the work-force of the future.”

Since opening her doors in 1981 as an executive search practitioner, Susan has become an expert on every aspect of labor market and work/place issues. She is a labor market futurist and a successful, award-winning entrepreneur.

She has weathered four recessions, and this recent economic aberration, and has advised numerous people on how to look for a job- no matter the state of the economy.

Susan is a huge proponent of the Portfolio Career and has spent the better part of her time speaking about its merits. She spoke at Lee Hecht Harrison, Somerset, NJ, to their downsized employees on how to search for a job in this economic climate. In February, Susan was a featured speaker at Colorado Mountain College, Edwards, Colorado, where she addressed "The Entrepreneur Fitness Center," in March she was a panelist for the North Essex Chamber of Commerce "Women in Power," series, in May she was a guest on My9 television to discuss the labor market and career options, in June she was quoted in an article "Reinvent Your Job," in Forbes magazine, in July she was profiled in New Jersey & Company magazine, in August she was highlighted in the Business section of The Star-Ledger, and in September she was a speaker at “Laid-Off Camp”, a workshop for the unemployed held at William Paterson University.

Two of the major trends in the US economy are shopping on-line and going green. To learn more about how to take advantage of these two mega-trends, as either an additional income generator or possibly as a new career path, visit www.24hourtour.net/fund2001.  After viewing this 20 minute video, call Jack @ 908-507-9879 to learn more.

Rewarding Career In A Growth Industry

Consider studying to become a Certified Financial Planner™ at any of six convenient locations where Fairleigh Dickinson University offers the professional program this fall. The non-credit FDU Financial Planning Program is a five course, 14 month course of study and it is New Jersey’s largest, oldest and most successful program registered with the CFP Board of Standards, Washington, DC.

For organizations having between 12 and 15 students the program can be delivered on site.

With the Baby Boomers coming into their retirement years and the world’s financial markets becoming more and more complex the need for sound, effective personal financial guidance is increasing every day. Opportunities for those with the appropriate CFP® Certification will be excellent.

Graduates of the FDU financial planning program often exceed the national averages of those taking the CFP Certification exam developed by the Certified Financial Planner Board of Standards, Inc.