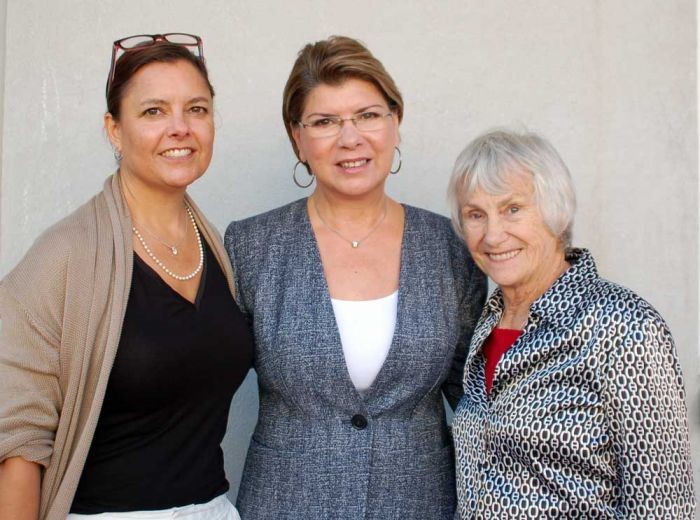 State Senator Nellie Pou (D-35 ) was a keynote speaker at THE 1ST ANNUAL TEEN GIRLS LEADERSHIP AND SUCCESS SUMMIT held recently at Oasis in Paterson NJ. Photographed (l) with Jen Brady, Executive Director of Oasis and Judy Chapman, Founder of Garden State Woman Education Foundation and co-sponsor of the event, Senator Pou addressed the seventy young woman who had arrived at 8 am on a beautiful Saturday morning. She explained how she was making a difference for her constituents and that one person can be a difference maker.

Kaity Rodriguez, MSW, Founder and Executive Director of The Role Model Group and former Miss New Jersey USA, delivered an impactful message about the importance of perseverance. Thru a vivid example, she demonstrated that no matter how often they might get pushed down, they still had value.

The luncheon speaker was Beverly Williams, an Employment and Labor Law Attorney, Lecturer and Author of “Get the Job Done”. She shared tips on career readiness topics such as networking, personal branding and personal appearance.

The morning began with a warmup Zumba session held by Renee Dorn, a Gold Zumba instructor. The first panel discussion was “How to Present Yourself” and addressed the physical appearance aspect of dressing for success. Garden State Woman scholar, Bria Barnes was the speaker. The mental health aspects of presenting oneself were addressed by Dr. Tiffany Brown, a tenured Associate Professor of Family and Child Studies at Montclair State University and Elaine Boniface, who maintains a private practice in Wyckoff working with teens and adults. She specializes in depression.

A hit with the audience were self defense tips illustrated by Ralph Keefe and his staff.

Final panel – Look towards your future – included Beata Skiba-Jakubowski, a personal trainer and Founder/Owner of Unique Fitness; Mahmuda Choudhury, a native of Paterson, graduate of JFK High School in Paterson; a 4-year GSW scholar graduating from Rutgers, New Brunswick and employed as a Chemist at BASF R&D; Charlotte Dreizen, a student at George Washington University where she is President/Director of Development for the Student Center for African Research and Resolution and is actively involved in the empowerment of women and girls globally. Veronica Barrios, a Doctoral Candidate at Montclair State University, is a public speaker on the issue of female youth empowerment.

More than a dozen volunteers participated in the program that was well received by the audience. Staff members from Oasis supported the event that was organized by Shikha Shay who coordinates the Teen Program after school. In general it was an energy filled day and we all were inspired by the appreciative audience.

The Garden State Woman Education Foundation has developed a series of one day summits to help teen age girls begin to plan their life and personal and professional careers. The GSWEF will be sponsoring a third annual Business Summit with Rutgers Business School in February 2016 and a STEM Summit with NJIT in April 2015.

Strengthen Our Sisters: the Remarkable Work of San...
There is an Oasis Right in the Middle of Paterson