"What hurt me more than the explosion was knowing that other kids will get hurt." - Daniel Yuval, 11-year-old landmine survivor

It took a young Israeli boy stepping on a landmine while playing in the snow to awaken Israel to the dangers buried in their own soil. Survivor Corps has long been aware of the threat posed by minefields in Israel. It's been 26 years since Survivor Corps founder Jerry White lost his leg to a landmine in Israel in 1984. This February, 11-year-old Daniel Yuval did the same, while playing in the first snowfall in the Golan Heights. Each year, thousands of citizens are endangered by the buried mines, with no national clearance policy in place. We have a chance to change that sad fact. Survivor Corps is working to ensure the government, the military, and local communities work together to clear the minefields that even the military acknowledge no longer protect, but instead threaten, the people of Israel.

At this very moment, the Israeli Knesset is considering a proposal to establish the first National Mine Action Authority that would be responsible for clearing minefields in Israel. 73 Knesset members have already endorsed this groundbreaking legislation, drafted by the Survivor Corps Mine-Free Israel Campaign.

600,000 landmines contaminate almost 50,000 acres in Israel – an area larger than Jerusalem and Tel Aviv combined. These landmines threaten Israeli residents in two ways. People are injured when they enter poorly marked or unmarked minefields; and landmines end up in people's backyards or agricultural fields because of flooding or other weather events that uproot the mines from the known minefields and move them into adjacent land. Clearing the minefields will improve public safety for Israel's residents. It will be beneficial for economic development, agriculture, and tourism by releasing valuable fertile land for farming, and prime nature reserves for hiking and other outdoor recreation. It will also bring Israel into the community of nations that have banned landmines and cleared their own minefields under the 1997 Landmine Ban Treaty. This community includes neighboring Jordan, which is on track to clear its minefields by 2012. Eliminating minefields will prevent unnecessary mine casualties in the future, free up valuable land for use, and improve Israel's international reputation. 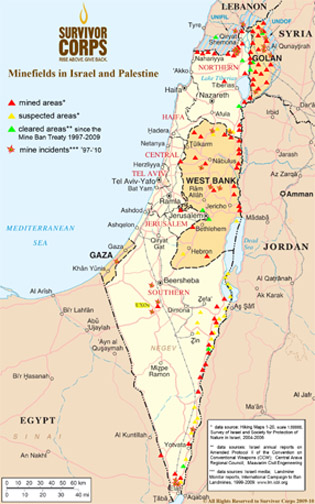 Now that the country is galvanized by Daniel Yuval's accident, it is time to seize the opportunity to ensure that such devastation does not happen again. Through this law before the Knesset, Israel would establish the Mine Action Authority and start the multi-year process of clearing mines. Young Daniel asked Jerry White if he could be the Campaign's Youth Ambassador. He presented a letter to the Knesset on May 10 when the legislation was introduced and declared: "When I awoke from the surgery...and saw my right leg amputated, I told my mom that I wanted that no one will get hurt by landmines again, and I mean to do something about that."

In a relatively short time, the Mine-Free Israel Campaign has achieved the following steps towards Daniel's goal. We have:
• Published the first-ever map showing the minefields within Israel.
• Released a report documenting the number of landmine accidents, the amount of mine contamination, and the specific problems faced by diverse communities within Israel that live next to minefields.
• Built a coalition that for the first time brings together residents from all mine-affected communities from the Arava Valley in the south through the West Bank to the Golan Heights in the north. The coalition includes Israeli, Druze, Palestinian, American and Thai survivors of landmine accidents within Israel.
• Drafted the proposed mine action legislation to solve the problem of uncleared minefields consistent with practices and protocols used by other countries.

We are at the cusp of real change and paradigm shift in Israel regarding landmine policy and clearance. Israelis have finally realized that landmines are not a security mechanism but a humanitarian problem that threatens its own citizens and their livelihood.

Unfortunately, good intentions are not a guarantee of good solutions. With your support, over the next eight months, the Mine-Free Israel Campaign will undertake the following:
• Work with all Israeli Knesset members and key government ministry representatives to make sure the mine clearance legislation is enacted, with strong leadership.
• Advocate with policymakers to secure funding for mine clearance in the 2011 national budget, and engage international partners, including the US government, to support efforts.
• Draw on the experience of other nations who have successfully cleared their minefields, and offer technical advice to monitor the implementation of the first professional, efficient and effective national demining plan in Israel.

Your support for this time-sensitive Campaign will help ensure a safer future for all those who live in or visit Israel. Campaigns to change people's hearts and minds are people-intensive. This campaign requires a small dedicated team as well as ongoing advocacy through media, one-on-one meetings with government officials and the military, targeted public events, as well as coalition and online community building through February 2010. Please invest in the Mine-Free Israel Campaign so that we can all make sure by the time Daniel Yuval finishes high school, "Israel will be clean of landmines and safe for hiking – like other countries in the world."