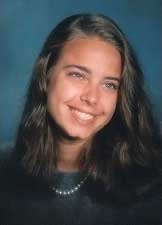 The second semester of her freshman year of college, Jenn Beisswanger was thrilled to realize her dream of becoming of Nittany Lion as she transferred to one of Penn State University’s campuses. Unfortunately, after only one week in her new school, Jenn experienced a grand mal seizure and a few days later, in January of 1998, surgery was performed by the Cancer Institute of New Jersey to remove a lemon-sized tumor in her brain.

In April, a second surgery was performed, this time at Memorial Sloane Kettering, and 90% of the tumor was removed. After an MRI in August indicated that the tumor was still growing, Jen underwent 6 weeks of radiation, trekking into NYC for treatment at MSK.

In remission, Jenn returned to Penn State in 1999 and completed both her second semester of freshman year and the first semester of her sophomore year. In December 1999, a routine MRI showed that the tumor was again growing and was more aggressive than previous. After another year of treatment, in January of 2001, her team of doctors determined that Jenn had exhausted all traditional treatment options and suggested that she undergo a stem cell transplant. Despite her valiant struggle, at the age of 22, Jenn succumbed to an infection following the transplant.

Because Jenn was diagnosed with brain cancer when she was 18, she was treated as a pediatric patient and was moved by the younger children that she encountered. Her compassionate nature gave her the ability to focus on others, even during her own battle. In fact, she once left her hospital bed in the middle of the night to offer help to an elderly woman experiencing great pain. During the course of her treatments, Jenn volunteered at the hospital, reading to pediatric kidney dialysis patients, and worked as a camp counselor.
Determined to do something positive in her daughter’s memory, and to continue Jenn’s legacy of compassion to other pediatric cancer victims, Susan Giardina developed the Beez Foundation. Her first step was to put together an advisory board, comprised of Jennifer's friends, local business executives and doctors from the Cancer Institute of New Jersey, Memorial Sloan-Kettering Cancer Center and Robert Wood Johnson Hospital, to provide guidance and to review grant proposals for research funding.
With the help of her advisory board, a three-fold mission was created for the Beez Foundation:
The Foundation created a number of fund-raising activities to raise the capitol necessary to fulfill their mission. Keeping with Jennifer's philosophies, most are family-oriented, fun events within the local communities and designed to have a strong community bond with local businesses and organizations cooperating in the various events. The most popular of these activities is the annual Rubber Ducky Race, on the Delaware Raritan Canal. In their last run, they dropped 5000 ducks into the canal, each sponsored for $5 a piece. The “owner” of the winning ducky wins a donated cruise. In addition to the Duck Race, the foundation also has a strong sponsor in the Somerset Patriots baseball team. For seven years, the Beez Foundation has run the Diamond Derby, which allows kids to run the bases on the field following Sunday home games, and has passed out materials and information on The Beez Foundation and pediatric brain cancer to game attendees. The Foundation is also developing a program called “Art from the Heart” which collects decorated hats to be passed out to children who have lost their hair from cancer treatments.
As a result of their fund-raising efforts, The Beez Foundation has donated $125,000. These funds seeded brain cancer research, which has resulted in a white paper presentation by one of the doctors they funded. Money has also been allocated to support patient/family services, including sponsorship of 400 nights at the Ronald McDonald House, annual sponsorship of a camper at Paul Newman’s Double H Hole In the Woods camp, and sponsorship of a woman authoring a children’s book about cancer.
To volunteer or to participate in the fund-raising activities, please go to www.beezfoundation.org.
×
Stay Informed

Getting Media Coverage
Because I Said So