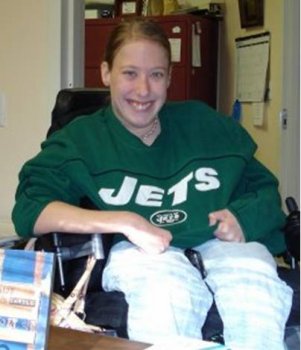 Megan Morhbutter of Florham Park, New Jersey was raised to be an advocate for herself. Morhbutter, a 23 year old recent graduate of Caldwell College was born with Spina Bifida. She has overcome 49 surgeries in her lifetime and doctors told her parents that she would not live past the age of five. Eighteen years later, Megan is not only living- but also living her dream. Recently she landed her lifelong dream job with the New York Jets.

Being brought up in a home full of avid Giants fans, Megan felt the need to be different and became a dedicated fan of the Jets and the game of football. Since she was 10, she had a crush on Wayne Chrebet, the past Jets wide receiver. Her childhood dream was to someday work for the New York Jets.

Megan is a resident of Cheshire Home, a nursing facility for young people with spinal cord related injury and diseases in Florham Park, and when she found out that the new Jets training facility was being built next door she was excited for the possibility of meeting some of the players.

Morhbutter received a B.A. in Communication Arts on May 17, 2009. Five days earlier, on May 12, Megan attended a golf fundraiser for Spina Bifida hosted by the Spina Bifida Resource Network (SBRN). SBRN is a 501 c 3 non-profit and is the only organization dedicated to exclusively serving numerous individuals plus innumerable family members who are living with Spina Bifida in New Jersey and Metro New York. Here, she met Bruce Harper, a Jets Alumni who was a participant at the golf event. While assisting on the course, Megan assertively reached out to Mr. Harper, explaining how big of a fan she was and proving to him she knew the number of wins and losses in a 5 year period. Impressed with her tenacity and accuracy, Mr. Harper referred her to someone at the Jets Corporate office. Megan sent out her resume and cover letter to the Jets expressing her desire to work for her favorite team.

This fall, Megan began her part-time work as a media relations coordinator for the Jets. She is in charge of meal sign in 2 hours before every home game and meeting and greeting the sports media. Her favorite part of the job is getting to watch the game live from V.I.P. seats and meeting sports media personalities.

During her college career she married and cared for her husband who was sick up until the time he passed away. It is her husband’s encouragement, she says, that still motivates her to keep going. He told her not to stay home, but to continue on with her life. After his passing, Megan had to take a semester off for medical reasons. It was then that she started volunteering at a nursing home and she continues that volunteer work today. She reads mail to the elderly, plays bingo with them, gives the ladies manicures, and just plain keeps them company. “I actually love it,” she said. She also goes to grammar schools and speaks to children to educate them about disabilities.

Megan states: “My mother raised me to be independent. I was raised to be an advocate for myself. That is how I have always been.” During her college career, she said, “I had very open communication with everyone on campus. I told them what I needed.”

Megan’s persistence and tenacity is what makes her unique, along with her attitude about living with her disability. She is a true believer that no one and nothing can stop you from living your dream.