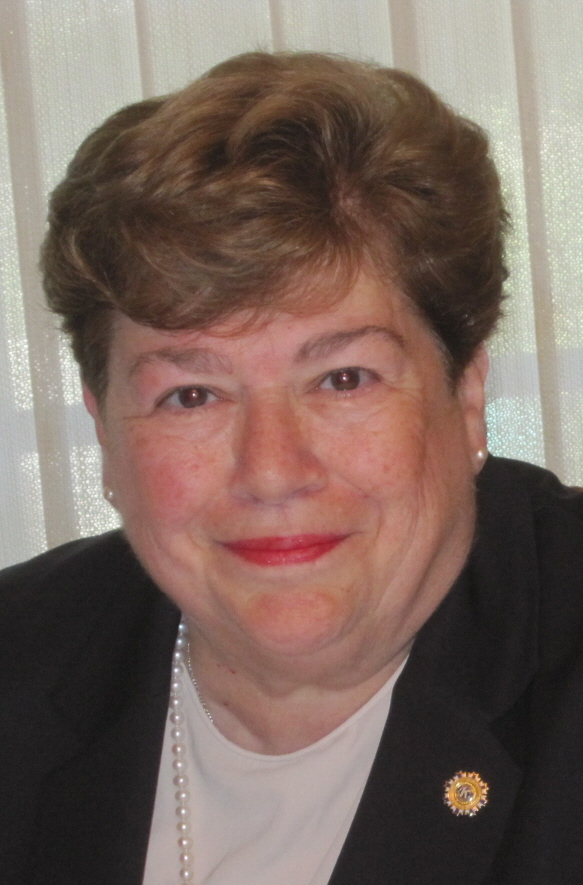 One of the last places we might expect to find Jo-Ann Dixon is on a playground unless she was babysitting her grandchildren. Finding Jo-Ann in unexpected places is not unusual. One of her passions is the service club, Kiwanis. A long time member of the West Caldwell Kiwanis Club, she recently headed up a committee to meet a need for the community. The Club had identified the need for a playground that was safe for children who might normally not be able to enjoy a public playground. We asked Jo-Ann what the special aspects of such a playground would be.

"It's lower to the ground, has soft (plastic) coverings on all components so they can't cut their little fingers, tear their clothing or get too hot, and has lots of 'handles' for them to hold onto as they climb as well as a very soft/thick landing surface if they fall."

We asked Jo-Ann where her interest in Kiwanis originated.

JD: I had been a very active volunteer since my college days and my husband was an active Kiwanian for many years. I was actively involved in the League of Women Voters and other women's groups but none seemed to have a scope the way I envisioned it should be.

Kiwanis, Rotary and Lions, all of the 'big' community groups with expansive reach were closed to women, but in early 1988, I received an invitation letter to 'take a look' at the Kiwanis Club of Caldwell-West Essex. It seemed that Kiwanis International had decided to open membership to women (followed two years later by Rotary).

We had moved to West Caldwell a few months earlier, and this would give me the exposure to do more of what I was looking for. I found much more within this local group. Kiwanis' motto is "serving the children of the world," as far as I was concerned that was perfect.

JC: What is the greatest satisfaction that you have had from your Kiwanis experience?

JD: This club has become an 'extended family.' I've had the good fortune to be offered leadership roles in significant and far reaching projects through my Kiwanis membership. There are two that I am most proud of. The first being my Chairing the Pediatric Trauma program where I led a small team of Kiwanians and RWJ EMTs to raise $500,000 and awareness throughout NJ to ensure that ALL ambulances were equipped with pediatric sized equipment, after learning in an interview with local EMTs that the one thing they most feared was coming upon an emergency scene with children, as none of the 'rigs' in NJ had pediatric equipment at that point. I worked with the EMT's using my corporate training and curriculum design skills to develop a kernel of a pediatric training program. I then received funds to send our EMTs to a conference in California to see if they could gather more information and present our ideas. They came back with out concept fleshed out and we did a pilot training workship here at RWJ. The program is now the pediatric training program for EMTs throughout the USA.

Another project was building the first playground design for integrated play (special needs and other children) in Essex County, NJ, hoping that other Kiwanis clubs and communities will begin to do the same.

JC: What has been the greatest challenge?

JD: In the beginning, the greatest challenge was me! Up to that point in my life, I had always let others determine what/how many projects I could support. I soon learned that I had a greater capacity than I'd been led to believe by other's choices. I also learned that I got more pleasure out of working for significant causes that I had a passion for.

JC: How did the playground idea evolve?

JD: To celebrate our Kiwanis club's 90th anniversary year our President wanted to do something big. She decided her Presidential project for the year was to build a playground. When she announced it at a Board meeting I asked if we can include some components that would be suitable for children with special needs. She remembered seeing something about special needs playgrounds at our international convention and began researching it and her vision became bigger. I volunteered to be on the committee and she and I met with the local rep for Landscape Structures, the company that builds playgrounds that are inclusive for kids of all capabilities. We met with him a few times as the notion really took shape--in the end we found the Superintendent of Schools and the School Board to be the most cooperative and welcoming. We invited the special needs teachers to meet with us and with their help designed a playground that all the kids enjoy!

JC: How long did it take to completion?

JD: Our President announced the project in late November 2013. There were several frustrating steps before we talked with the Superintendent of Schools, once we had a conversation with him and his staff the project took off. As you know the weather did not cooperate earlier this year and so we had to wait longer than anticipated, until the ground dropped below 40 degrees so the post holes could be dug and posts cemented to the ground. Once started it took about a month to complete the structure to the point that it was 'playable'.

JC: Were there other key members of your committee?

JD: We had a small committee of four. Our President, Mary Ann Luke, who had been a banker for many years and had a good head for busines, one of our past-presidents, a financial planner who had also served as a commissioner in a large NJ city and had a good understanding of the bureacracy that we originally had to deal with and a newer member who's been a local undertaker for years and thus knew many in the community and turned out to know our Superintendent of Schools very well. Lastly there was myself who knew how to develop written materials, PowerPoint presentations, brochures as well as grant proposals with participation of our President to ensure that we remained true to our mutual vision for the playground. 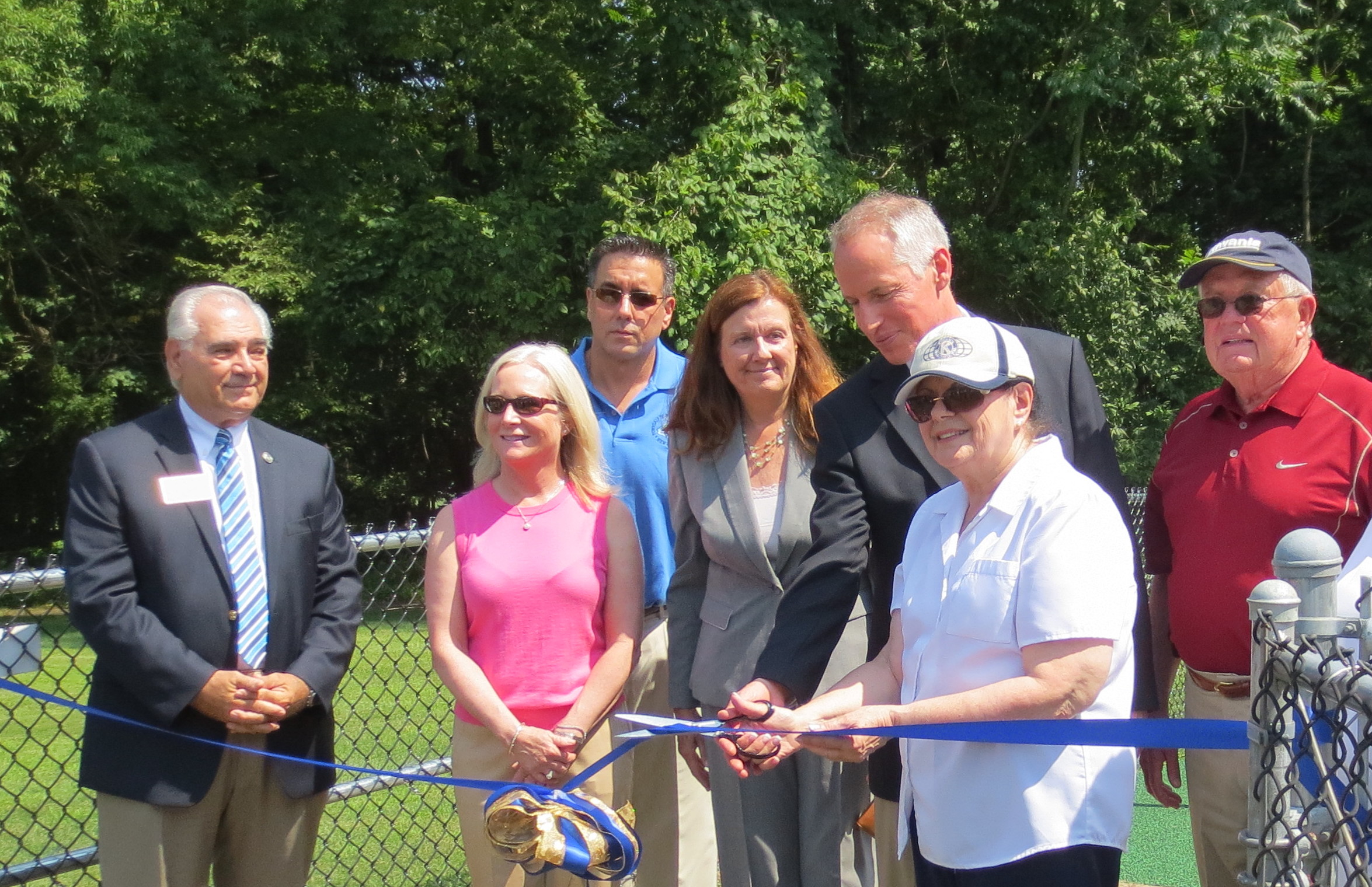 JD: First know that we are available to speak to if you want to flesh out your approach and know what to look out for. There are a few things to keep in mind:

JD: This project made it clearer to me why I joined Kiwanis in the first place and have traveled to their International Conferences for many years--to learn how to serve the children of the world; whether it's my local 'world' or the international picture. Making families and particularly children feel and be safe is my personal goal. Next year my Presidential project will actually be several smaller projects that will make the communities we represent safer.

I suppose that's why I've been hooked on Garden State Woman--because strong, focused women help keep our kids safe and strong. Working with the battered women's shelter for over 20 years has taught me that kids need sound adults around them to keep them aware of themselves, and to teach them how important love, trust and respect is to our individual essence.

You can contact Jo-Ann Dixon at This email address is being protected from spambots. You need JavaScript enabled to view it..

More in this category: « An Inside Look at a Famous Military Scandal South-Indian-born Composer To Premier “Book Of Ragas” At Carnegie Hall »